First there was Iggy Peck, Architect, a book that Lorelei discovered from a student whose parents were clearly more concerned about her literary future than Lorelei's parents... While Lorelei brought in a flimsy paperback about sparkly fairies, her classmate brought in these two gems by Andrea Beaty.

Now there is Rosie Revere, Engineer, a book about Iggy Peck's classmate Rosie.  Young Rosie is a shy girl who dreams of becoming a great engineer.  In her spare time, when no one is looking, and after her lights should be out, she happily creates gadgets and gizmos.  She invents contraptions for anyone and everyone, including for her favorite zookeeper-uncle Fred.  For him, she creates a hat made of parts of a fan and cheddar cheese spray to keep snakes off his head. 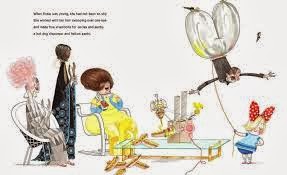 
He laughed till he wheezed and his eyes filled with tears,
all to the horror of Rosie Revere,
who stood there embarrassed, perplexed, and dismayed.
She looked at the cheese hat and then looked away.
"I love it," Fred hooted.  "Oh, truly I do."
But Rosie Revere knew that could not be true.
She stuck the cheese hat on the back of her shelf
and after that day kept her dreams to herself.

Until one day (and thankfully, there is a "one day" for Rosie as I hope there is a "one day" for all of us), her great-great-aunt Rose tells tales of the things she's done in her long, full life.  Aunt Rose has accomplished everything she's ever wanted on her long bucket list.  Except one thing: to fly!  She has not yet had that thrill, and she doubts if she'll get the chance...at her age, it might be just an old lady's dream.

That night, Rosie cannot sleep.  She wants to help.  She knows she can!  The idea of creating a flying machine for her Aunt Rose completely captivates her (as I hope things captivate my kids and yours).  So, the next day, she creates a flying machine.

She hauls it out before Aunt Rose, her confidence shaky.


Strapped into the cockpit, she flipped on the switch.
The heli-o-cheese-copter sputtered and twitched.
It floated a moment and whirled round and round,
then froze for a heartbeat and crashed to the ground.


Then Rosie heard laughter and turned round to see
the old woman was laughing and slapping her knee.
She laughed till she wheezed and her eyes filled with tears
all to the horror of Rosie Revere.

But before little Rosie gives up her dreams altogether in one horrible moment of failure, her wise old aunt grabs hold of her and gives her a you-did-it speech.  Rosie is confused; did Aunt Rose not see that her invention failed?  Of course she saw it, and of course it failed!  But for one brief moment before it crashed, it flew!


"Your brilliant first flop was a raging success!
Come on, let's get busy and on to the next!"
She handed a notebook to Rosie Revere,
who smiled at her aunt as it all became clear.
Life might have its failures, but this was not it.
The only true failure can come if you quit. 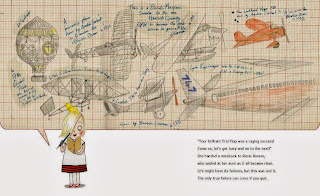 Rosie goes on to invent more things of and on her own, and she also inspires her classmates (including Iggy) to create contraptions both silly and useful--contraptions that my kids thought were a complete hoot.

The three huge things this phenomenal book does are pretty clear but I have to applaud Beaty a thousand times over:

First, it gives the spotlight to a little girl bravely tip-toeing into a field traditionally dominated by men.  There's no mention of it, but that's because in elementary school, girls don't yet realize when they are making moxie-filled decisions.  They're just being true to themselves.

Second, it teaches the importance of failing--the need to fail!--as a part of the learning process.  I read Mindset: the New Psychology of Success over the summer, and scrawled on our kitchen's whiteboard "Mistake = the opportunity to learn and grow," hoping they'd begin to understand. I hope that more kids are more open to making more mistakes and learning from them than perfectionist me ever was.

Third, Beaty provides all of these examples and lessons in a children's book that is fun and interesting and cool!  She accomplishes so much in such a cooly written and awesomely illustrated book. David Roberts' quirky and creative and fun illustrations are a fantastic compliment to her story, for sure.

Oh...and a fourth...! Of course I love the nod to Rosie the Riveter, the original American tough girl.  That is just the icing on an already amazingly wonderful book.

P.S.  This book made me want to start a new category--"mighty girls"--on my blog, so I'll be going through all my past entries to tag/label all books that encourage female empowerment. If you've got a girl or you're a teacher, definitely check out A Mighty Girl website.  I can get lost there for days!
at 5:19 AM