The Year of Billy Miller by Kevin Henkes 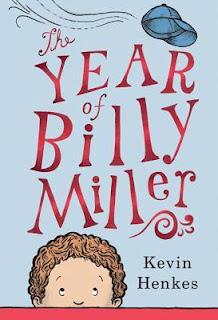 The Year of Billy Miller by Kevin Henkes
Greenwillow Books

Billy Miller finds himself at the end of summer vacation, about to start second grade when he suddenly realizes that he might not be smart enough for second grade. The worrying creeps into his mind and he just can't shake it.

He starts second grade anyway--as if he has a choice!--and throughout the book he has small, second-grade-sized challenges that he worries about then overcomes, and Billy realizes that everything turns out okay in the end, and sometimes it turns out even better than okay.

I solidly liked this book, but Lorelei solidly loves it. She's read it a few times and recommended it to several of her friends. She read it the summer before her second grade, which I think is the perfect time to read The Year of Billy Miller, especially if that second grader has some (normal!) frets about school. There's nothing objectionable in this book and Billy has a yesteryear quality about him--he's a rule-following kid, a sweet big brother without a bit of sarcasm or eye-roll in his body.
My favorite aspect of the book is the fact that there is no huge problem Billy needs to overcome. His parents don't fight or go through a divorce, no family member or friend dies, he doesn't lose his favorite pet. Billy's challenges seem bite-sized to us grown-ups but seem giant-sized to a kid barely four feet tall. And I like that a lot, because those little daily problems (such as your sister ruining a school project or reciting a poem in front of the whole school) are what life is chock full of for kids.
What I don't love about this book: I think his parents help him too much. It's his super-hip artist dad that helps him redesign his school project after his sister douses it in glitter. And it's his always-patient mother who rescues him at the climax of the story, smack dab in the biggest small problem of his whole life. I love books where the kids have the total spotlight and the parents are in the background--I love watching kids solve their own problems, even if they create some problems of their own, too.

But despite my misgivings, I enjoyed watching Billy grow over the course of the year, and this is a great one to read this summer with your soon-to-be second grader, or a book to let that kiddo read by him/herself. 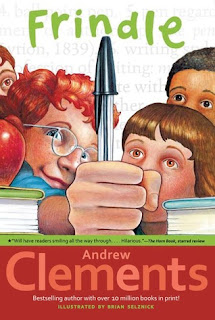 After Lorelei begged me to read this for nearly half a year, I finally picked it up and read it in the crazy-busy last week of school. Much to the delight of the clutter in my kitchen, I'm never too busy to read! Lorelei is right--the book is hilarious and very worthy the praise it's received over the years.

(Frindle is a short chapter book and fine for kids to read on their own, but fun to read aloud with them.)

Is Nick Allen a troublemaker? Not really. He just wants to make the time spent in his school a little more interesting, and when his usual pranks don't work with his new teacher, he has to get creative. Inspired by his teacher's love of words, and her very own explanation that we the English-speaking populace give credence to the definition of words, Nick invents a new word: "frindle." It means pen.

In just days the word spreads through the school, in weeks it goes beyond the school, and soon enough the word "frindle" is the next Big Thing in the country. It's hilarious to watch the debate between clever Nick and his teacher about whether he should get in trouble for this or not. I'm happy to report that relationships between the kids and grown ups in Frindle are respected though boundaries are pushed a bit...in an age-appropriate and above-average very funny way. Oh, and the ending is surprisingly tender-hearted.

Without a doubt this is one of the best middle grade books I have read--so funny, so clever, so sweet! I continue to search for well-written books that feature great story lines and clever humor rather than cheap humor and yucky sarcasm. Some of the recent middle grade books that Lorelei and Ben have read in the past school year are just...not so awesome in my humble opinion. Yet Frindle is definitely in the category of Great Summer Read. Can't recommend this book enough for your summer reading list!

(And if you like it, Andrew Clements is known for mastering the middle school voice and has written dozens of chapter books about elementary and middle school! Click HERE for a list of his books.)
at 5:47 AM No comments: 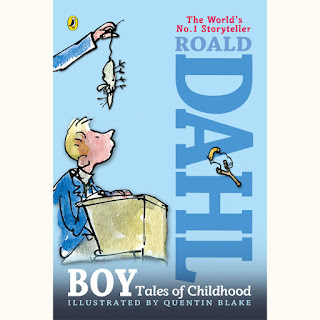 Well, it's a fact: My childhood was a snooze-fest compared to Roald Dahl's exciting one. Then again, perhaps I should count my lucky stars that I wasn't one of a huge brood, that I didn't get shipped off to boarding school a little too young, that I didn't get beaten for tiny infractions, and that I didn't grow up in a world stricter than strict!

I've wanted to know more about Roald Dahl for a long time, and this autobiography of his youth was incredibly satisfying. It was also a riot! I loved it--laughed out loud several times while reading it, not caring if I looked like a loon while laughing in public at a beat-up library book that is probably meant for children.

As a child I read a lot of Roald Dahl books, and I remember vividly my mother reading The Witches out loud to me--and having it be creepy and hilarious at the same time. That's quintessential Dahl for you... This would be a fun book to read out loud with kids, too, but also a fine one for them to read on their own. Either way, I think it's most appreciated after you or your child read a few Roald Dahl books.

In Boy, Dahl writes about the part of his life where the idea for Charlie and the Chocolate Factory  came from (at boarding school Cadbury would give chocolate bars to boys and ask them to test them, and Dahl realized that the chocolate creators, those inventors of all things sweet and rich and chocolatey, took their jobs very, very seriously...). Also, it's clear from the horribly funny run-ins with The Matron at his boarding school where the inspiration of the headmistress in Matilda came from!

An early chapter reader might enjoy The Enormous Crocodile or a other short stories. Lorelei read James and the Giant Peach, Charlie and the Chocolate Factory, and Danny Champion of the World several times on her own when she was six or seven. I won't let her read The Witches--I want to read it out loud to her, like my mom did! When I was telling her about Boy: Tales of Childhood, I love that she was annoyed with me: "Mom, why did you return it without giving it to me?!"

Yup, this book is good enough to pass around from one generation to another. Enjoy chuckling at a childhood far more entertaining than my own!